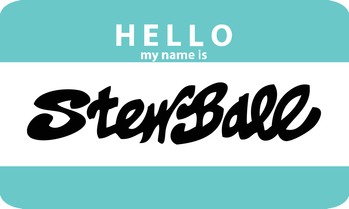 Stewball​ is a a twentysomething half racehorse, half unicorn, starring in comics and animation by San Francisco–based artist Kate Isenberg. Quadruped by birth, biped by choice, Stewball has a stubby half-horn that he files down to a spiral birthmark, so he can fit in socially.

With a driven racehorse dad, a dreamy unicorn mom, and a BFF on Death's payroll, Stewball longs to become a commercially successful poet. A mix of Hamlet, millennial Charlie Brown, and equine Little Prince, Stewball is the spirit animal of the awkwardly earnest, the aspiring artist, and the working stiff—of anyone with a dream in their back pocket.

Stewball's origin story
​Kate Isenberg created the first Stewball comic strip in 1998, for a zine called Undermatter. At the time, she was an editorial intern at Mother Jones magazine, in San Francisco, checking facts in investigative journalism articles for $100 a month. Frustrated by the mismatch between their lofty ambitions and their lowly rank, the interns created Undermatter as a parody of Mother Jones. Kate soon began distributing Stewball comics on foot and by bike to San Francisco bookstores, Laundromats, and coffee shops.

In 2012, Kate enrolled as a graduate student in animation at UCLA Animation Workshop. With production funding from Simpsons creator Matt Groening, Kate created the Stewball animated short film Dear Death. The film has since played in festivals around the U.S. and internationally, carrying Stewball's hoofprints from San Francisco to Brooklyn, and from Bogotá to Bucheon, South Korea.

​Read more about Stewball's origins in this interview.

O Stewball was a racehorse, and I wish he were mine.
He never drank water; he always drank wine...

O the fairgrounds were crowded, and Stewball was there.
But the betting was heavy on the bay and the mare.

But away, up yonder, ahead of them all,
​Came, a-dancing and a-prancing, my noble Stewball!

I bet on the gray mare; I bet on the bay.
If I'd have bet on old Stewball, I'd be a free man today.